You Are Here: Press Release Fraunhofer Institute for Laser Technology from October 30, 2014

The Laser Institute of America LIA has awarded Professor Reinhart Poprawe, the director of the Fraunhofer Institute for Laser Technology ILT in Aachen, the 2014 Arthur L. Schawlow Award. The award ceremony took place at the 33rd International Congress on Applications of Lasers & Electro-Optics (ICALEO) on October 22, 2014 in San Diego, California. 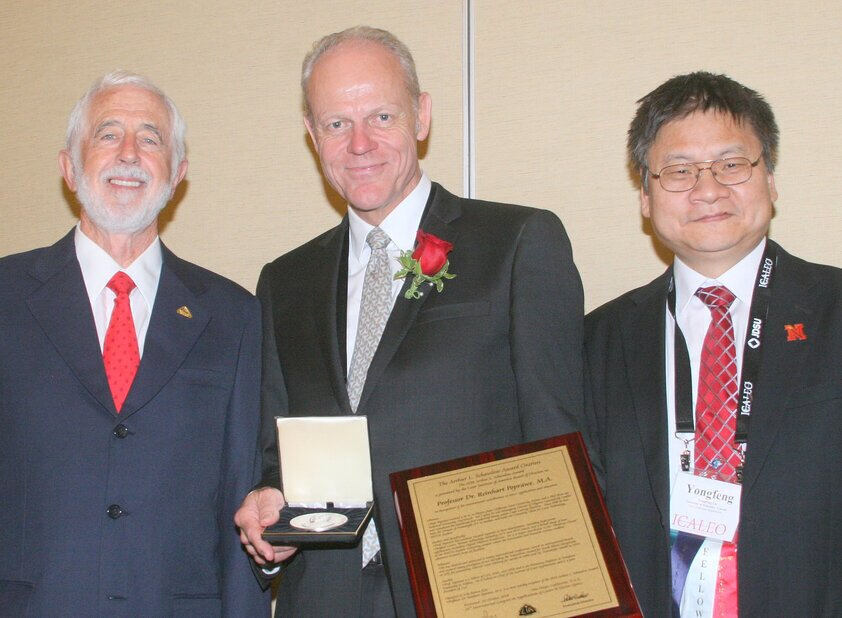 The president of LIA, Yongfeng Lu, and its executive director, Peter Baker, presented Prof. Proprawe with the 2014 Arthur L. Schawlow Award on October 22. In front of around 350 participants of ICALEO, they honored the former LIA president for his outstanding contributions to basic and applied research in laser technology. His services have forcefully advanced the application of lasers in the industry, medicine and daily life. In his presentation, “Digital Photonic Production – The Future of Tailored Light,” Prof. Poprawe explained how laser technology, in particular by linking it with the virtual world, will change the future of industrial production.

With the Arthur L. Schawlow Award, the Laser Institute of America recognizes individuals who have made distinguished contributions to advancing the laser as well as to transferring this knowledge in science, industry or education. Professor Arthur Leonard Schawlow, who won the Nobel Prize in Physics in 1981, was the founding father of the Laser Institute of America, LIA Fellow and life-long member of LIA. After 30 years of teaching as a physics professor at Stanford University, California, he retired in 1991.