You Are Here: Micro-Structuring of Ridge Waveguides 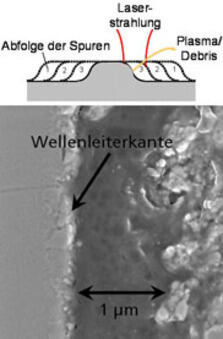 The structuring of ridge waveguides is realized by ablation using fs-laser radiation.

Structuring of Thin Films
Fs-laser radiation induces the local ablation of thin films, thus creating parallel grooves which form the edges of the resulting ridge waveguides. Those waveguides with a rectangular cross-section are adapted to the beam cross-section of the broad-stripe diode lasers used as a pump source.

The influence of the processing parameters on the roughness of the waveguide edges (and thus on the damping) is tested. Here, the main emphasis is on the control of the formation of ripples in the ablation area to prevent additional roughness of the edges. The research activities focus on the enlargement of the processing limits, aiming at increasing productivity on a constant, satisfying quality level.

Pulsed Laser Deposition is used to produce a thin film of approx. 1-5 µm in thickness of laser-active material on appropriate substrates. The variation of processing parameters, such as temperature and processing gas pressure, leads to crystalline or amorphous, glass-like films. The influence of the processing parameters on the optical properties of the implemented laser-active ions is spectroscopically examined and its influence on the structural properties of the films is determined. The life-time of the electronic levels as well as the measured cross-sections of absorption and emission serve as a starting point for the design and modeling of waveguide lasers.

The coefficient of damping by scattering has a high impact on the efficiency of waveguide lasers. Therefore, further alternatives are under investigation to reduce scattering particles (droplets) in the film and to diminish the surface roughness. The laser-active layers are coated with thin films suitable for cladding, in order to adapt the numerical aperture of the waveguide lasers to the pump diodes and to avoid interfering environmental influences (such as pollution).