You Are Here: Principles

From single-pulse drilling to percussion drilling to trepanning to helical drilling, the precision and reproducibility of the drilled geometry (for instance regarding diameter or conicity) as well as the drilling time, increase. Trepanning, supported by a processing gas, enables the production of cylindrical drilled holes with a small recast-thickness. Because of its processing characteristics (small heat affected zone, strong evaporation and a small amount of molten material), helical drilling is applied to achieve high-quality drillings.

Percussion drilling
Percussion drilling is a pulsed drilling process. It is used for material ablation with laser radiation from sequenced pulses. Compared to single-pulse drilling, the achievable aspect ratio is higher. Typical values for drill hole diameters range from 100 µm to 1 mm. Drillings depths up to 20 mm can be realized. Percussion drilling is performed using pulsed laser radiation with pulse durations in a range from femto- to milliseconds. Depending on the pulse duration, the intensity and the temporal intensity progress of the laser radiation, the created holes vary in quality regarding the thickness of the recast layer, the aspect ratio, the conicity, or the development of cracks in the melt as well as in the base material.

Trepanning
Trepanning is a combined drilling and cutting process. A through-hole is pierced by single-pulse or percussion drilling, which is then cut out until the target hole diameter is reached. The maximum thickness of the workpiece to be treated is ? for typical diameters ? almost identical to percussion drilling, i.e. < 3 mm. During the trepanning procedure, the biggest part of the melt is expelled at the exit of the drilling, enforced by a coaxial flow of processing gas. In addition to the circular trepanned holes, conical or elliptical geometries can be realized as well (contour trepanning), depending on the positioning installation. For contour trepanning, the laser is moved in a simultaneous 5-axis motion along the target geometry during the cutting process. Thus it is possible to create drill holes with different geometries of the entry and exit.

Helical drilling
Compared to other drilling techniques, helical drilling offers the maximum precision. One characteristic of the method is the self-rotating laser radiation following a circular path relative to the component that is treated. The ablation process is carried out spirally in several passages across the workpiece. By altering the spiral radius and the laser radiation's angle of incidence it is possible to produce conical or countersunk drill holes. 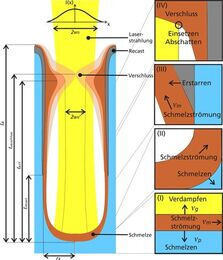 During laser drilling the material on the drill hole bottom is molten and vaporized (I). The later creates a high pressure gradient, which forces the molten material on the hole's bottom to flow in radial direction. This flow of melting results in more molten material via heat conduction and convection. As a consequence the drill hole's diameter increases to approximately twice the focus diameter of the laser (II).
Within a blind-hole the molten material is driven out along the hole's walls and opposite the propagation of the laser radiation (III) resulting in a closure at a certain drilling depth (IV). When one-pulse drilling is applied such a closure can be vaporized again during the single pulse and during percussion drilling subsequent pulses remove the material. 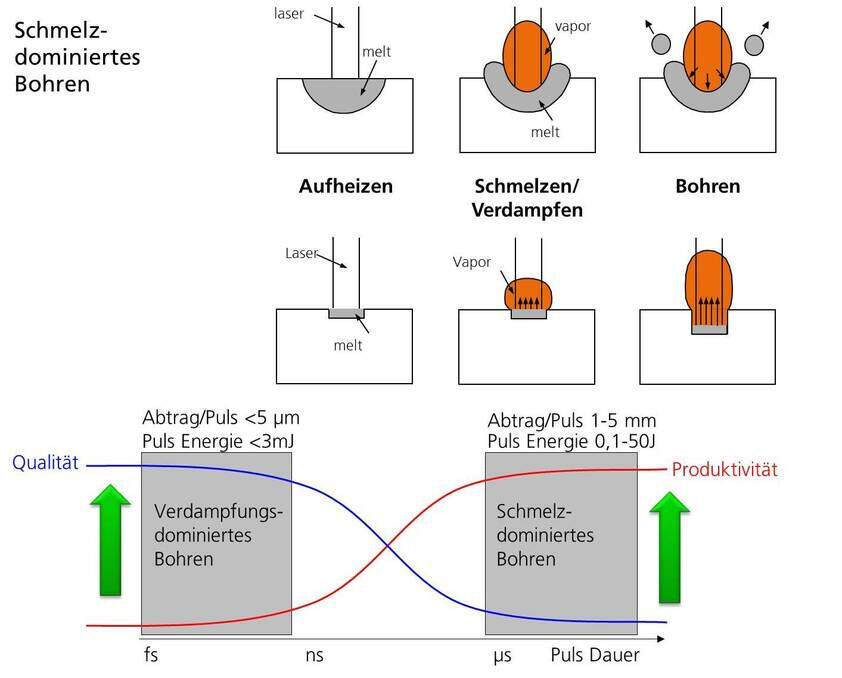