You Are Here: Graphene

Demands placed on the materials used for microelectronic components are rising along with the trend towards increasing miniaturisation. Since the synthesis of single-layer graphene was demonstrated for the first time in 2004, it has become a rapidly growing area of scientific and technological interest owing to the excellent intrinsic electronic, mechanical and thermal properties of graphene. The fundamental obstacle to produce graphene on an industrial scale is the absence of a reproducible and substrate-independent production technique with satisfactory lateral resolution.

Copyright: Chair for Laser Technology LLT Schematic illustration of the principle of the laser-induced deposition of graphene on a transparent substrate.

A novel laser induced, non-thermal ablation and deposition process has experimentally been validated to be capable to generate ultrathin graphitic flakes. Ultra-short pulsed laser radiation (tp < 500 fs) is applied to optically excite highly oriented pyrolytic graphite. As a consequence of the optical excitation, the atomic layers of the graphite bulk target begin to oscillate. Collisions between different oscillating layers lead to a momentum transfer normal to the surface. This momentum transfer causes a detachment of intact graphitic layers. 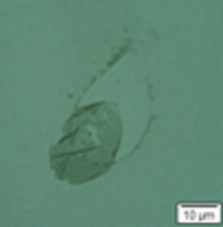 Aside from aspects for fundamental research, the exceptional mechanical and electronic properties of graphene have attractive interest due to the prospects for a broad spectrum of technical applications. Potential applications can be found in a variety of fields ranging from microelectronics, highly sensitive gas sensors and gas-tight packaging coatings to possible components for the generation of THz radiation by plasmon excitation.

D. Wortmann, 2011: The physics in applications of ultrafast lasers