You Are Here: Nanoantennas 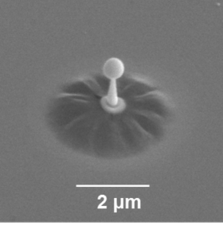 With a USP laser induced single nanoantenna on a gold layer.

In the scanning nearfield optical microscopy (s-SNOM) and in surface enhanced infrared absorption (SEIRA) spectroscopy optical antennas are applied to amplify evanescent nearfields and thus to increase the sensitivity of the measurement. SEIRA is an optical measuring technique applied to detect the characteristic absorption bands of a certain molecule. In order to detect signals from individual molecules or molecules of low concentration, such as in thin films, the backscattered light of these molecules must be amplified. The s-SNOM technique allows for an optical detection of the chemical and structural properties of a test sample in combination with a spatial resolution below 20 nm, which is fundamental for analytical applications in biology and chemistry.

Ultrashort laser pulses are focused by a microscope objective onto 30 nm thin gold films. Due to the short pulse duration of 100 fs the high intensities, which are achieved even at pulse energies of a few 10 nJ, induce ultrafast melting of the gold film across its entire thickness. The following melt dynamics cause an upwards directed material ejection in the center of the irradiated area (jet). The small quantity of energy input enables a resolidification of the gold jet as it moves upwards, forming a stable antenna.

Nanojets as optical antennas, for instance for SEIRA or s-SNOM applications, can be manufactured with a diameter of less than 100 nm. By suitably selecting the spotsize, the pulse energy of the pulsed laser radiation and the gold film thickness, the size of the nanoantennas can be controlled very precisely. Thus, these customized antennas are highly suitable to enhance the signal of characteristic absorption bands of certain molecules in SEIRA spectroscopy.

Nanojets as optical antennas can be applied for analytical applications in chemistry, biology and mechanical engineering. The amplification of evanescent nearfields enables the optical detection of low concentrations down to individual molecules with a spatial resolution of 10 nm.