You Are Here: fs pump-probe microscopy 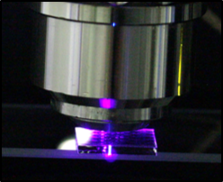 In addition to the use for materials processing, ultrashort laser pulses can also be used for imaging processes with an extremely high temporal resolution in the femtosecond time regime. This is realized using the pump-probe microscopy. A single laser pulse is split into two pulses: The first, so-called, pump pulse is used for processing the material. The second pulse, the probe pulse, has a significantly lower intensity than the pump pulse and is used for imaging. Compared to the pump pulse, the probe pulse is delayed in time by varying the propagation length. So basically, any time of the interaction and ablation process can be specifically adjusted and be investigated.

This method enables the investigation of the initial interaction of the laser pulse with the processed material, which typically takes place on a timescale of a few picoseconds. Furthermore relaxation dynamics of the excited material and the onsetting of the ablation mechanism can be analyzed, which takes place on a time scale of tens to hundreds of picoseconds. Thus, a profound understanding of the machining process with ultrashort pulsed laser radiation can be generated and strategies for optimum processing quality and efficiency can be developed. 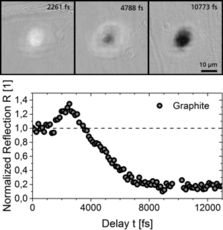 Copyright: Chair for Laser Technology LLT Reflectivity of an irradiated graphene surface with an ultrashort laser pulse at three different times after excitation.

The ablation of graphene is investigated in several project at the LLT (see The production of graphene with USP laser radiation). Using pump-probe reflection measurements of the irradiated graphite surface, the excitation of free electrons in the material can be observed, which corresponds to an increase in reflection of the surface. Within a few picoseconds the electrons give their energy to the phonon lattice and an onsetting ablation mechanism is observed when the reflection typically falls below the initial level.

At the LLT, the laser-induced ablation process of metals is investigated, for example aluminum using transversal pump-probe shadowgraphy. For a fluence of 10 J /cm² a bulging of the irradiated surface is observed within the first 500 picoseconds, which can be explained by the so-called phase explosion of a molten surface layer. The expulsion of melt from the irradiated volume is observed on a ns time scale.

Copyright: Chair for Laser Technology LLT Shadow photography of the USP-ablation of an aluminum surface at different times after excitation.

I. Mingareev, 2009, Dissertation: Ultrafast dynamics of melting and ablation at large laser intensities

I. Mingareev, 2008: Time-resolved investigations of plasma and melt ejections in metals by pump-probe shadowgraphy

As part of the research campus Digital Photonic Production (DPP), supported by the federal ministry of education and research (BMBF), the LLT investigates the time resolved ablation of wide bandgap materials using the pump-probe microscopy. Thus, new methods and basic physical effects for the use of laser radiation as a tool for the future will be developed.